Had Gastric/Acidity Problem! This is how I began Intermittent Fasting

Gas, Acidity, and feeling bloated were a few of the major regular issues that I faced when I had begun Intermittent Fasting, back in January 2017. To add on, I was obese, suffering from high BP and high pulse rate.

Before I began Intermittent Fasting, the only time I would not eat was when I was asleep! Night snacking was mandatory for me and the first thing I would do after waking up was have my breakfast. Pills for gas and acidity was a must after having food to ensure I am able to sleep properly.

Today I observe prolonged water fasting for 96 plus hours where I do dry fast, the first day. I am a regular intermittent fasting practitioner.

I think anyone* can start and get the benefits of intermittent fasting.

Here are  a few tips on how I began Intermittent Fasting and even you can if you are suffering from gastric problems:

As you regularize intermittent fasting in your life, in a week or ten days, acidity and gastric issues would end, in an ideal situation.

Experts I listen to and I recommend listening to:

Dr. Josh Axe – video on How to overcome Gastritis

Thomas DeLauer – video on Common Side Effects of IF

*Please note: I am neither a certified dietician nor an expert in gastric issues. I have mentioned what worked for me. If you have any specific health conditions like stomach ulcers or if you are on any kind of medication causing gastric issues, or any other reason, you may consult your physician and/or dietician prior to beginning Intermittent Fasting.

The novel coronavirus, or COVID-19, the pandemic has spread across at least 155 countries. There are at least 137 active reported cases of a novel coronavirus in India right now. The Union Health Ministry has said that 13 people have recovered so far, but three have died. Worldwide, about 1.82 lakh confirmed cases of COVID-19 have been registered and approximately 7000 people have died so far, most of whom are from China.

From malls, theatres, trains and other public places in cities to entire cities and countries getting locked down under the threat of corona, there is a fear, whose door is next to be knocked by the virus.

#YogiAdityanath the new CM of Uttar Pradesh has taken quite a number of stern decisions and two ow which are #AntiRomeoSquad to ensure the public gardens of the capital of the state does not have loverbirds loitering around. Second is, shutting down illegal #slaughterhouse in the state. Mixed reactions on stern steps in initial phase of Yogi Raj from every where.

#AchcheDin for some and not for all. 😀 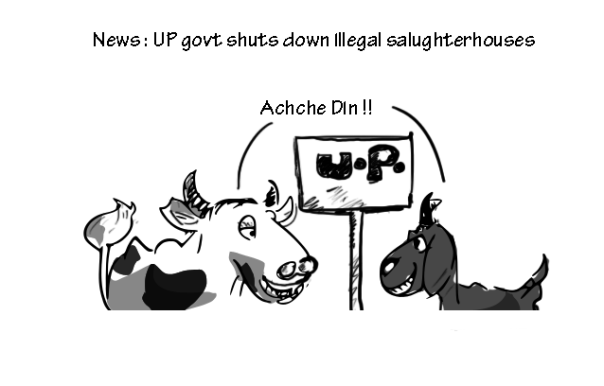 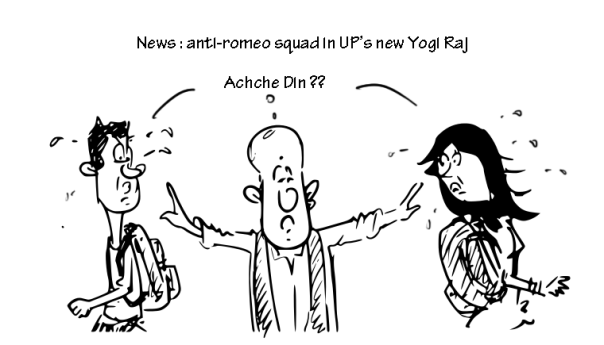 Meanwhile, Shiv Sena’s MP, R. Gaikwad agitated with delay of Air India flight and no business class available in the flight ended up making #SlipperGate controversy when he picked up his sandal to beat up Air India official during heated altercations.

In return, Air India blacklisted him as a customer and canceled his ticket twice and also filed two FIRs against him.

It all started with much known “freedom seeker” Umar Khalid ( he wants India to free Kashmir) being invited to give lecture in Ramjas College on the topic “Culture of Protests”.

Well!! Anyways, then entered the villains.

The ‘goons’ of BJP student union  did not allow this seminar and curbed the ‘right to speak’ (against the nation / in favour of terrorists / separatists ) of poor Mr Khalid who has been charged with sedition last year for raising anti-national slogans in JNU.

Come on !! How come people are supporting such curbing of rights ? Democracy.. man !! This is a free nation (where we could independence literally easy enough to take it for granted). I will do what I feel like as best. I will try to find freedom yet again in this country because there are people who are curbing my rights.

They are curbing my rights. How ??Wait ! Let me think about it. Give me some time to consult leftists or Sagarika Ghose .

They are not allowing me to speak against the country and against the army ( because of whom I, my family, friends and relatives with similar thoughts of seeking freedom, are sitting safe in the country).

What is this govt and its student wing upto ? How can they not allow pro-terrorists and anti-national slogans and curb our democratic rights ?

After all this is not some Middle-East country where freedom has a real meaning . What is this fake freedom in India ?

And yes !! They who speak against these freedom seekers like Umar Khalid and Kanhaiya Kumar are termed “bhaqts “ . Bhaqts, basically are slaves. Slaves of this nation called India. They do not want freedom of speech. Freedom to sit, eat and peacefully shit on  motherland because the army of the nation is protecting their “rights”.

And yes now new heroes are coming to raise voice against curbing of rights :

Introducing … daughters and sons of War Martyrs, the ones whom you can trust are supporting the ‘correct people’ because they have nationalism in ‘blood’. They can define and redefine “nationalism”, “democracy” and “freedom” .

Simple!! They were born to war martyrs.

And yes true democracy means you cannot speak against “freedom seekers” and ” sons and daughters of martyrs” even if they hurt your national sentiments. Period !

Since the invasion of Modi on Delhi as the PM the nation seems to be divided into two major clans : Bhaqts and Sickulars. And looks like nobody likes you to stay anywhere between. Be it the Sickulars aka the anti-Modi clan or the Bhaqts aka the pro-Modi clan, none allows you to stay in this political “no clan’s land”.

The sickulars, as the bhaqts have named them, have suddenly started feeling that India needs yet another freedom fight and yet another Gandhi ( reincarnated as Mr Sniff Kejriwal or the new “Red” boy Kanhaiya. Some see Gandhi in Rahul as well).

On the other side, the bhaqts, as the sickulars have named them, feel the Messiah of Bharat, has finally made it to the throne and that now India will become super power in another 3 years or so.

Well!! Everyone has the rights to chose a hero or two. We Indians are no less. We need superheroes as much the entire world needs. So be it !! Choose Modi or Kanhaiya or Kejriwal or even MSG or Salman. Who cares ??

With the Modi govt taking some strange and rarely taken “strikes” before and their debatable outcomes (short term, you may argue ), the sickulars are  getting the breather zone. And being sickular would mean you cannot even doubt about the philosophy that Modi is Hitler. That Modi is killing democracy. He is anti-minority and for sure anti-muslim. He lies about everything. He is the second name to destruction. Muslims and other minorities are being harassed for being so. And yes, the nation has been captured by him and his army of Bhaqts, Senas, Dals and RSS. Also, the note-ban was some moronic step for no reason and/or to help Amabani and Adani wash their black money to white. Surgical strikes on Pakistani land was a self made story by the Messiah and his men.

Will someone tell these guys, the sickulars in particular, that they are yet anther clan like the bhaqts. Like the bhaqts who cannot take any criticism of  Messiah Modi, even the sickulars have closed their eyes and have considered themselves captives of the Messiah seeking freedom for Kashmir, themselves and may be life. 😀 😀 😀

As much one blames Arnab Goswami of talking pro-nation and BJP only should he/she also not blame Barkha Dutt and likes for show-casing Kanhaiya Kumar as a hero and Hardik Patel as rebel ?

The Bhaqts and Sickulars. Please play your clash of clans amongst yourselves and let monkeys eat bananas and dogs bark at strangers. Let some be themselves. 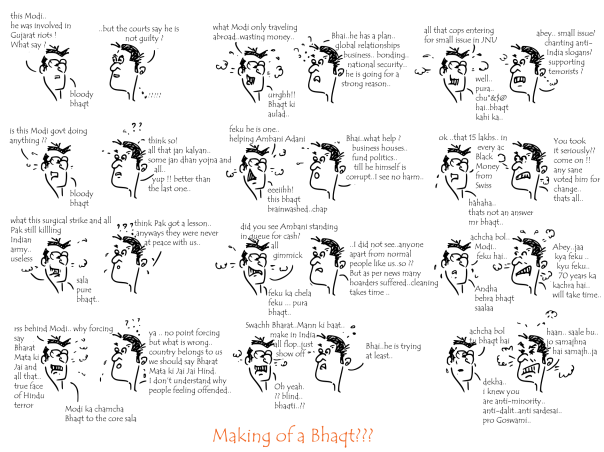 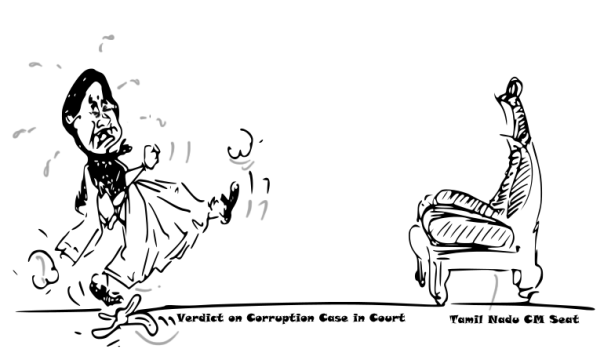 The fight for CM seat of  Tamil Nadu and deepening of crises in AIDMK party is getting intensified with Panneerselvam  vs Sasikala Natarajan both claiming the CM seat.

As Tamil Nadu faces the crises of CM, UP is preparing to elect CM again. The SP and Congress have joined hands while BJP has lack of leader face and Mayawati seems confident of getting the CM post yet again.

But this shouldn’t be offending us. Most of us treat this day alike. Its probably just the PMs, army and the school students who need to wake up early on Independence Day. “Aam Aadmi to sota hai late tak aaj ke din 😉 “ 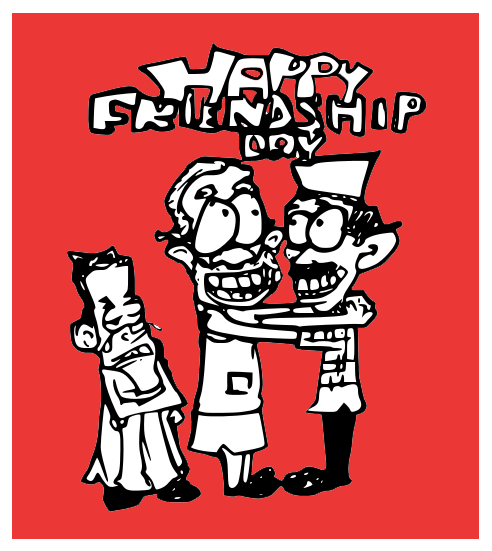 Search For Cartoons of:

Error: Twitter did not respond. Please wait a few minutes and refresh this page. 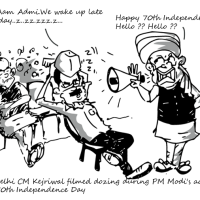 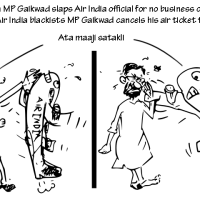 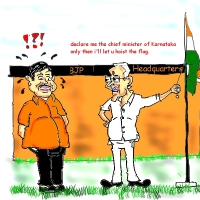